“People say football is only a game, but it’s more than that to me”

Paul has optic nerve damage, through Glaucoma, is registered severely sight impaired and uses a guide dog. He is also an assistant FA qualified coach. He’s the first person with no sight at all to have this qualification. 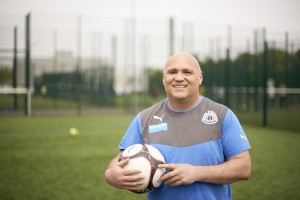 When Paul was completing his training, he came across a stumbling block. A small part of the assessment process is that the coach needs to be able to watch what the players have done. In the case of someone with no sight, this would usually be done with a support worker, but in Paul’s case, his skills were at such a high level that it was accepted that he should be able to deliver assistant level coaching alongside a sighted head coach, who could assist with this element if necessary.

Guidelines have been written with sighted people in mind, so it’s a huge achievement that Paul was able to prove he was at the same standard as a sighted coach. He tells us about his journey back to football with Henshaws.

“I’ve loved and played football all my life at various levels, I’ve been a Newcastle united fan since the age of 2, and attended my first game at aged 5. Some of my happiest memories are being sat pitch side watching my favourite team play. I watched the world cup by listening to radio commentary through the broadcasts from the BBC and ITV, I watched most of the matches and I love it! When I was in my 40’s and I lost my sight completely, I just stopped playing. I felt as though that was something I would never be able to do again.

I met Philippa from Henshaws by chance at my local sports centre. The receptionist assumed that I was there to see her because I had a guide dog, and it was a few minutes of Philippa bombarding me with questions until we realised what had happened! She soon told me about everything that Henshaws had to offer and I really liked the idea of trying football again, though I wasn’t sure if I’d be able to do it.

When I first started to play with Henshaws, my coordination wasn’t great. I was quite nervous and would stand around waiting for the ball to come to me. It took a few weeks to adapt but then my confidence increased and I was able to run after the ball.

Football has helped me to develop so many new skills 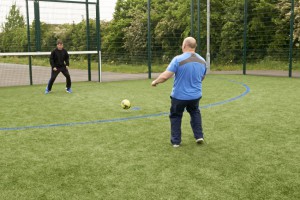 is only a game, but it’s much more than that to me. It’s helped me to develop spatial awareness, something that is really important as a severely visually impaired person. I’ve gained a lot of social skills too, it’s really helped me to develop communication skills, when playing football with a visual impairment you need to keep talking to each other and explaining what you’re doing, well, more shouting than talking sometimes!

I love playing football at Henshaws. Everyone on the team is great, really friendly and helpful. We have a lot of fun! I now volunteer with the Children’s team, coaching on a Wednesday evening. It’s really important to me to pass on my knowledge of the game. I want to help visually impaired children to get the same enjoyment out of playing the game as I do and I hope to move on to full time coaching in the future. I’ve always taken my fitness seriously, but so playing football again has given me the chance to stay active whilst taking part in a sport that I love.

I’ve been lucky and fortunate to meet Philippa from Henshaws, it was a chance meeting, but one that’s changed my life for the better. I’m much happier now. Henshaws have opened up doors for me and given me football back, I wouldn’t like to be without it now, it’s such a huge part of my life.”

To find out more about what activities we offer; visit our Friendship Matters pages or contact your local centre for more information.