Thanks to the generous support of our donors, Henshaws continues to support some of the most vulnerable people in our communities. You can help us be there for those who need us most, by making a donation today.

Below we explain what Charles Bonnet Syndrome is, who is affected by it, what causes it, what the symptoms are, and any available treatment options.

“When I was first told about it, it took me a few days to actually get to grips with it, and it was a couple of weeks before I became ‘comfortable’ with it – in the sense that it didn’t frighten me. But, right from the start, being told I wasn’t losing my mind made a tremendous difference straight away."

Arthur shares his experience of CBS and his advice for dealing with the condition on our blog. 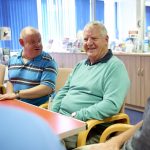 Charles Bonnet Syndrome (CBS) is the name given to the condition where people with sight problems see things that aren’t really there.

Sometimes called visual hallucinations, the images people see can take all kinds of forms, from simple patterns of straight lines to detailed pictures of people or buildings. CBS can be upsetting although the hallucinations are not usually permanent.

Who is affected by Charles Bonnet syndrome?

The syndrome can affect people of any age who have suffered severe sight loss, and also those who have lost their sight in later life, usually after a period of worsening sight. The visual hallucinations often stop within one year to eighteen months, although this is not the case for everyone.

When a person’s eye sight is failing, the visual part of their brain receives fewer signals so the under-stimulated brain may start generating signals of its own to fill the gaps.  This seems to happen more when people are sitting alone somewhere quiet which is familiar to them, or when they are lying in bed at night, and occurs more often when people are tired.

Symptoms – What kind of things do people see?

There seem to be two different kinds of things people see: patterns and lines which look like mosaic, brickwork or tile, or pictures of people and places.  Both types of images may be in either black and white or colour, either move or stay still and may seem real.

Often whole scenes will appear, such as landscapes or groups of people, which are sometimes life-size and at other times tiny, and may last for a few minutes or several hours.  Many people begin to recognise similar things appearing in visions, such as distorted faces or the same tiny people in costumes.

What are the effects of the hallucinations?

Sometimes the complicated pictures make it difficult to get around as, for example, the shapes of streets and rooms may have changed, making it difficult for the sufferer to judge exactly where they are.

The complicated pictures can be scary as, although the visions themselves may not be of anything frightening, it is disturbing to start seeing strangers in your house or garden. People often overcome their fear by getting to know the figures in their visions.

It is normal to worry about seeing things and a lot people keep quiet about their hallucinations in case others think they are losing their minds.  It is very important to realise that failing eyesight and not mental instability causes this syndrome.

Treatment – Is there a cure for Charles Bonnet Syndrome?

Unfortunately there is no known treatment for the hallucinations, but it is very important to remember that this condition is very common, and that it is perfectly normal to be experiencing Charles Bonnet Syndrome after sight loss. Frequently the visual hallucinations stop on their own in response to an improvement or further deterioration of vision. Knowing it is poor vision and not mental illness causing these images often helps people to come to terms with them.

It is worth trying to alter conditions when the visions occur to see if this will help them disappear.  For example, if the visions happen in the dark, switching on a light may help, or if they happen in the light, switching off the light may be effective.  Opening and closing the eyes, concentrating on something else or looking or walking away may also help.

TEDTalks by Oliver Sacks:What hallucination reveals about our minds (watch below)

This information can be made available in Braille, or audio CD, should you require it, by emailing manchester@henshaws.org.uk

Explore our other pages on eye conditions

Are you concerned about your sight, or someone’s close to you? Our First Step team are here for you to provide you with any information, support or guidance that you need.