For the love of art 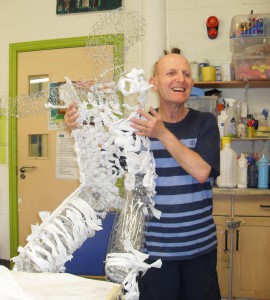 Jon is a prolific artist who loves to work on large scale sculptures. I was lucky enough to sit in on a studio session to see how he creates his art, and how tutor Shirley supports his creativity.

Firstly, I had to let Jon know I was there, and introduce myself. Jon is profoundly deaf and has very little vision, so much of his connection with the world is through touch. He likes people to stand in front of him, and then tap his left shoulder. I then reached for Jon’s hand, and spelt out my name on his hand. Finger spelling is so simple – I learnt it at Brownies and it’s stuck with me! Jon then gently felt my face, and the camera I was holding, and nodded to confirm he understood why I was there and he was happy to have his picture taken.

I then got to watch Jon and Shirley work together, weaving plastic bags through a 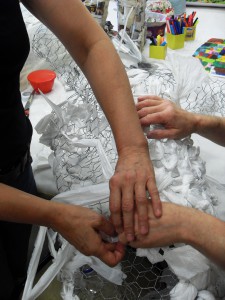 chicken wire structure. Art has become a focused passion between the two of them, and a unique way of communicating. Earlier in the week, volunteers cut carrier bags into strips for Jon to use. Shirley created a giant wire figure, and they’re now working together on the piece; she guides Jon’s hands to spaces ready to be filled with colourful texture. Without words and idle chatter, their relationship is all about their shared love of art, recycling and creating wonderful things together.

I asked Shirley if she’d had to have any specialist training to work with Jon. “It’s all about the art!” she laughed. “To help Jon, I have learnt basic finger spelling; it’s very quick to learn. When I interviewed for the job, they asked me if I had an interest or specialism in big sculptures, which I think helped get me the job. Really though, we just get on artistically and communicate through making pieces.” 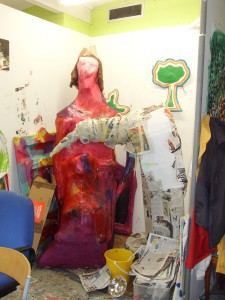 Jon has been an Art Maker with Henshaws for over 10 years, and has created some of the larger pieces around the Centre, including a 7 ft papier mache angel and a bust of Vincent van Gogh. A life size cow he created for a nativity scene was recently sold to a local collector (and transported home strapped to the roof of their car), and he’s currently working on a 6ft penguin and a full size Tour de France bike and rider. Once the giant penguin is finished, Shirley plans to fill Jon’s studio space with willow to surprise him. Jon is also an expert weaver, and has previously enjoyed working with willow and learning basket weaving skills, but sculpture takes up much of his time (and space)!

Jon doesn’t stop when he gets home either – when his large-scale creativity threatened to take over his bedroom, a garage at his house was converted into an art studio which he can access independently.

Having watched Jon work, and seen 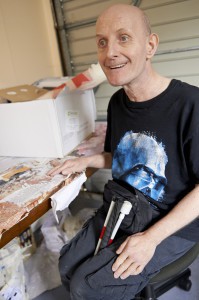 him around the centre, it was great to properly meet him and introduce myself. I loved that Jon shared with me an insight into how he works and what inspires him, and I reluctantly dragged myself away from the art studio. To say goodbye to Jon, I tapped him on the shoulder, signed “thanks and bye” on his hands and he gave me a thumbs up. Jon might be DeafBlind, but it’s such a small part of who he is. Primarily he’s an artist, and a damn good one!

Footnote: the Bike themed art is being created as part of ‘Don’t Lose, Re-use’; a Can Do community project with Ruth Bowen and Leonard Cheshire. 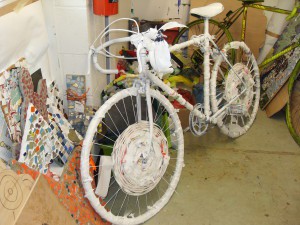