The latest technology to be released by our friends at Orcam is the nifty Orcam Read, which is their first piece of handheld assistive kit. Richard from our Digital Team put it to the test with our virtual Tech Talk group of visually impaired people in Greater Manchester - here is what he had to say...

The Orcam Read is a handheld smart device that identifies, captures and reads text aloud. The existing tech of the Orcam My-Eye and Orcam My-Reader are both finger-sized devices that attach to the side of a pair of glasses; Orcam have used the knowledge they have acquired from these devices and used it to create their first handheld model.

Our monthly Tech Talk groups across Greater Manchester discuss the latest tech news, new ways to use existing tech, and personal knowledge/experience. The groups are a mixture of beginners and experts, and plenty of knowledge is shared around. At last month’s virtual Tech Talk (held via video conference due to current Covid-19 restrictions) we discussed the Orcam Read in detail; here is what we talked about. 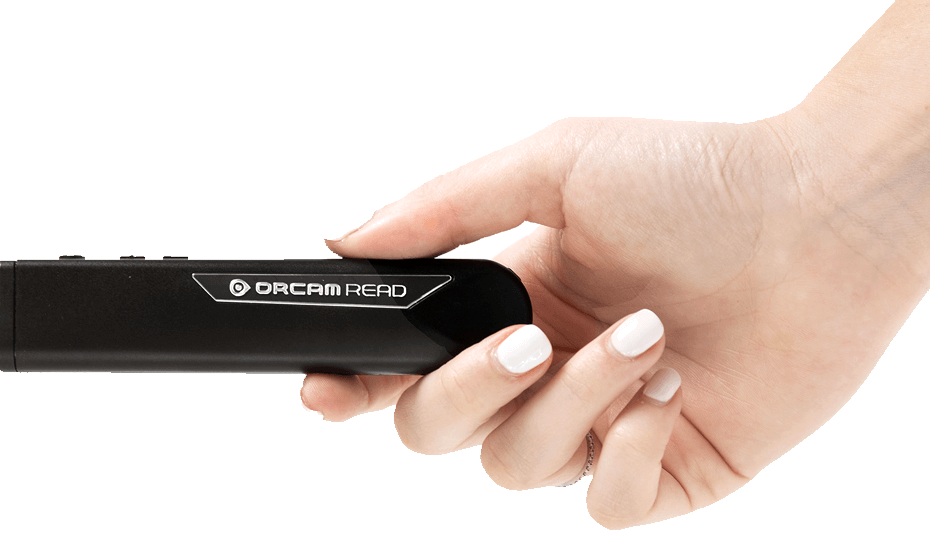 The device is a similar size to a medium tube of toothpaste, measuring 5 inches or 12 cm long, 1 inch or 3 cm tall and half an inch or 0.5 cm wide. It comes in a box with a lanyard to avoid accidently dropping it, a pair of in-ear wired headphones, charging lug and charging cable.

Along the top of the device, from back to front, is the charging connection, a tactile push-button power switch, 4 indicator LED’s, shaped, tactile plus and minus buttons, and a round tactile capture button. The headphone connection is located on the back of the unit and the camera and associated LED’s and lasers are on the front. The design was such that once I had familiarised myself with the product, I was able to find everything purely by touch.

I pressed the power button for a few seconds to turn on. At first, I thought there was nothing happening as I had not seen the power LED on the bottom of the unit and there was no sound, and 40 seconds later, it announced that it was ready and the battery level. As I was expecting this delay the second time I turned it on, I was not left wondering if something was going to happen. The power LED comes on straight away, which gives some reassurance that something is happening, but only if you can see it!

Pressing the plus and minus buttons changed the volume level of the device, and gave vocal feedback confirming the button press and when maximum volume had been reached. The only thing left to do was to read some text.

I grabbed a letter that I had received that morning about my pension. The letter had text in a mixture of sizes from 5 point to 12 point. When I pushed the read button, a laser beam was shone on the letter in a pattern that consisted of 4 corners and a brighter central beam. The idea is to ensure that the text is within the four corners, then let go of the button. It was less than 2 seconds between letting go of the button and the text being read out.

As a comparison, the app Seeing AI took 6 seconds on the same document, and Dream Voice Scanner took 3 seconds.

Accuracy was pretty much perfect for the 10 and 12 point text. There were a couple of errors on the 8 point text where a couple of 5’s were mistakenly reads as s’s. When I improved the lighting, accuracy improved to 100%. Apparently, there has been an update that detects the lighting conditions and turns on an LED to illuminate the text if lighting is not good enough.

I tried turning the letter upside down and the Orcam Read said, “The text seems upside down. To read it, rotate the device and try again.” When I tried at an angle of about 45 degrees, text recognition was, once again, perfect. The device was also quite forgiving when it came to reading a book, where the page bends at the spine and does not sit perfectly level. As long as the text was visible, the Orcam Read took it in it’s stride.

There is a menu where you can change some of the settings. This is accessed by holding down the power button and then pressing either the plus or minus button. All the menus are completely voiced and you can change things like the voice and speech rate and access the connectivity options. You can use Bluetooth headphones with this device as well as corded headphones if you want a bit of privacy.

Overall, the Orcam Read was very easy to use and very accurate in the right lighting conditions. It does not require an internet connection for day-to-day use, but does for any updates.

If you would like to purchase this device, please visit our online shop.