Introducing version 8 of the Synapptic software

Staff on the Henshaws Digital Enablement Team have been training people on Synapptic phones and tablets for well over five years now, and it's still a very popular piece of technology for people with sight loss.

For those unfamiliar with Synapptic, it is a piece of software that goes on an Android phone or tablet which enables you to access the device easily if you have low vision or no vision at all.

The software is aimed at people who may have lost their sight in later life and want to catch up with the latest technology, those who may be nervous about learning new technology, or those people who want a simple and intuitive interface to be able to stay connected to people and to carry out everyday tasks like reading mail, sending an email, browsing the web or doing some online shopping.

For nearly a year now, the staff in the Henshaws Digital Enablement Team have been the dedicated trainers for Synapptic products across the UK. It has been a great year and we have supported people up and down the country over the telephone to get started on their new Synapptic devices.

The Synapptic software has come a long way in the last five years. To begin with, although the phones and tablets were very accessible, there were limits to what you could do. As time has gone on, it has just got better and better with newer updates.

The latest update, version 8, has brought in 19 new features which not only makes it more accessible, but introduces more activities into the Synapptic environment.

They also have a great range of peripherals to support their devices such as external keyboards, bone conduction headphones, stands, speakers and even printers. 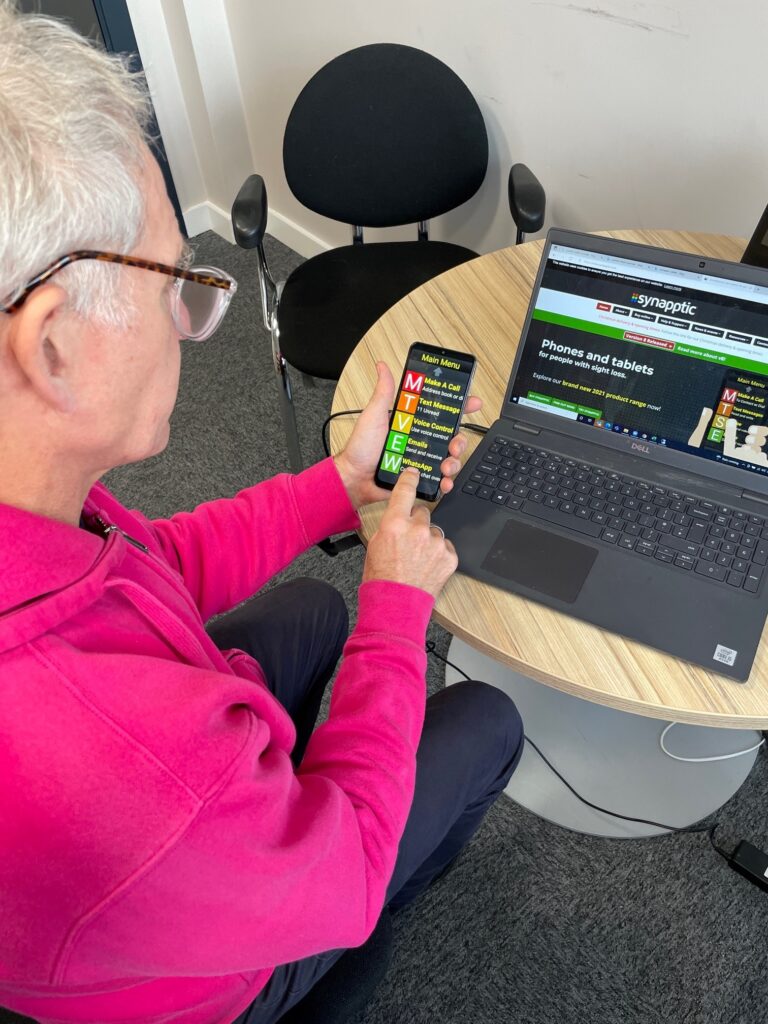 “Six months ago I could not even do text messages let alone think about attaching photos! I hope everyone else is getting as much pleasure from their Synapptic phone as I am.”

Read more about Synapptic version 8 below, as Mark, who manages the Digital Enablement Team, talks through some of his favourite features.

Synapptic has had lots of updates and improvements over the years. Version 8 has just been released and it has 19 new features. Here is a summary of some of my favourites.

You have always been able to use Voice control to operate some features of the Synapptic software, but V8 has added some more to this. Want to watch TV or listen to a particular radio station quickly and easily? Just use the Voice Control option and say commands like “Watch BBC1”, “Watch Channel 4”, “Listen to BBC Essex”, “Listen to BBC Manchester”.

Instead of being limited to reading text, web pages or emails on your small screen you can now achieve ultimate magnification by wirelessly sharing or mirroring your phone or tablet screen on a TV!

Easily search, download and play audio books from the RNIB Reading Services Library. The library contains over 30,000 books, all of which are FREE to download and there are no limits on the number of books you can listen to and no need to return the books.

The RNIB books feature is incorporated into Synapptic, so there are no new or complicated screens to learn.

A few items on the Main Menu have been altered to simplify access to commonly used options. For example the Social Media item has been changed to Social and now contains YouTube, Facebook, Twitter and Skype.

The Synapptic Settings menu has been re-organised into clear categories, instead of one large list. This makes it much easier to access the device it quicker and easier to find and change the settings you want

The new Dark Mode changes the colours on all web pages to have a dark background and light text, making it much more accessible for some people.

Sharing content from the phone has also gotten easier. New features have been added to help you share favourite or recently viewed YouTube videos and web pages with friends and family.

Some people need to have speech on all of the time to be able to access the device, but others may just want speech on some of the time. If you use speech feedback and are an experienced Synapptic user, you may wish to reduce the amount of instructions that Synapptic speaks out. The new update allows you to customise that

Version 8 hasn’t disappointed us. Lots of  changes have been made to help clarify and simplify the operation of Synapptic.

More importantly, more features have been included within the software which means not having to access the android screens directly. 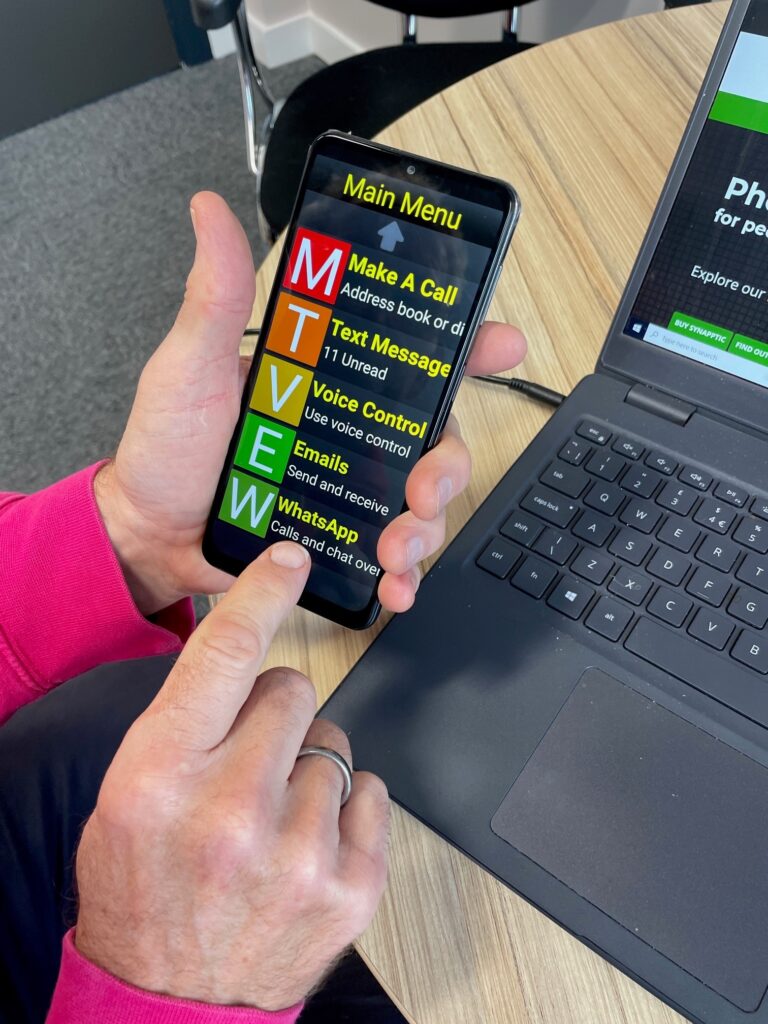 “It’s an absolute game changer! I can’t believe how much my life has changed. Thank you so much.”

If you haven’t heard of or used a Synapptic device before, then it may be something worth considering (especially with the new Version 8), or if you have a device already and want some more training on the new features, then contact us at Henshaws.

Visit the Synapptic website for more information about the products available.