My experience as a severely sight impaired illustrator

Hello, everyone! As mentioned in my previous ‘Day in the Life’ blog post, I’m a keen illustrator and am currently producing a piece of artwork for each monthly issue of RNIB’s Insight Magazine throughout this year. I wanted to share with you some of my illustrations, as well as how I won the competition for their ‘Young Illustrator of the Year’ title, and give a little more background into each of my illustrations so far.

I entered the ‘Young Illustrator of the Year’ competition in late November, when the RNIB’s Insight Magazine were looking a new illustrator for 2014, to produce monthly pieces of artwork adhering to a different theme – tying in with the current issue as a whole. 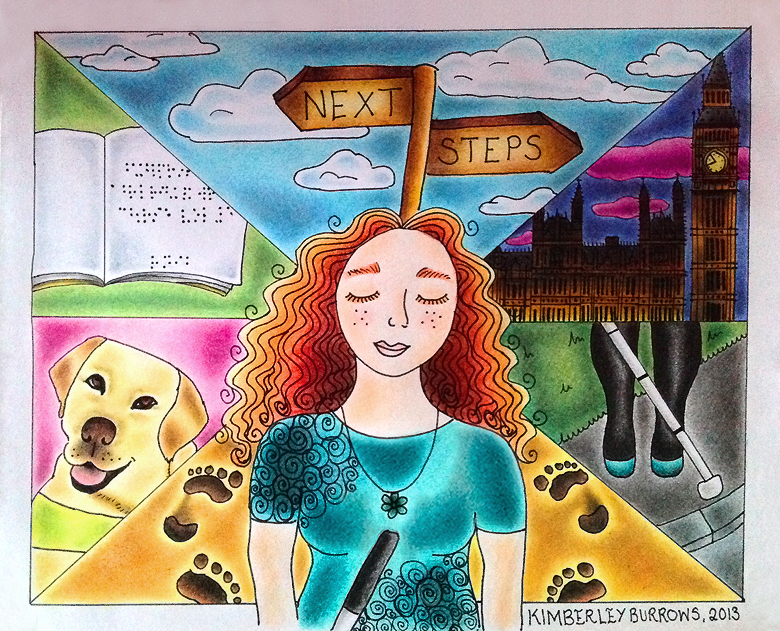 The theme for the competition was ‘Next Steps’, so I wanted to portray myself in the middle of the illustration surrounded by my future aspirations; completing my Braille course at the Henshaws centre in Manchester, training for my guide dog, finishing my cane training with the Salford mobility team and future campaigning with the RNIB. Above my illustrated self the sign board has ‘next steps’ engraved into it and towards the bottom of the picture are golden sands with footprints representing the journey to come.

My illustration took the whole month of November to complete. I didn’t think I would win, but received an e-mail response not long afterwards telling me that I was now the illustrator of the year! I was over the moon that my hard work had paid off and was very excited and enthusiastic to get started with my next illustrations.

I have now completed two more illustrations since the new year; one depicting accessible technology with my favourite apps and features of my iPad; including accessibility functions such as zoom, voiceover, speech, and apps such as iBooks, Facebook and Twitter – and another portraying image portraying preparation for adult life – preparation for adult life and the tasks that come with it; including shopping independently, washing clothes and using appliances, preparing meals safely, and managing money to pay bills.

I recently received media attention for winning the title of ‘Young Illustrator of the Year’ and was featured in my local newspapers the Salford Advertiser and Manchester Evening News, as well as appearing on the Daily Mail Online website, on ITV News and Granada Reports.

The best way to describe the experience is certainly ‘whirlwind!’ I wasn’t expecting any attention from the media, and the opportunities presented themselves because of the power of social media – particularly Twitter. I had followed the Twitter account of Salford News, so that I was able to keep up-to-date with the news in my local area on my Twitter feed, and through that a reporter had looked at my profile and saw that I was creating artwork for Insight Magazine as a severely visually impaired illustrator. 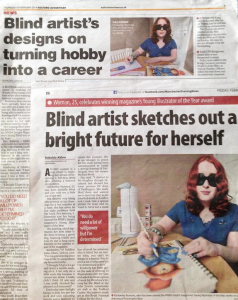 It was wonderful to go into the Henshaws centre in Manchester and share the experience with my friends – including staff, volunteers and service users – and a lot of them had seen my article in the newspapers, or heard it on the Salford Talking News, and watched my feature on ITV News and Granada Reports. Their support and positive feedback were overwhelming and meant the world to me!

I’ve now received praise and support from the Mayor of Salford, Ian Stewart, and an article was written about me and my illustrations and featured on the Spirit of Salford website. I will now be attending the Salford Weekender in May and hopefully have the chance to meet the Mayor himself.

I’m extremely grateful for all of the opportunities that I’ve received since winning the RNIB’s illustrator competition, and I’m looking forward to completing my future pieces for their magazine.